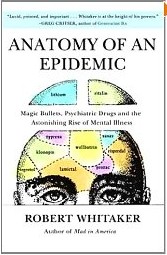 Appearing on AdBusters yesterday and excerpted from Anatomy of an Epidemic:

Imagine that a virus suddenly appears in our society that makes people sleep 12–14 hours a day. Those infected with it move about somewhat slowly and seem emotionally disengaged.

Many gain huge amounts of weight – 20, 40, 60, and even 100 pounds. Often their blood sugar levels soar, and so do their cholesterol levels. A number of those struck by the mysterious illness – including young children and teenagers – become diabetic in very short order. Reports of patients occasionally dying from pancreatitis appear in the medical literature. Newspapers and magazines fill their pages with accounts of this new scourge, which is dubbed metabolic dysfunction illness, and parents are in a panic over the thought that their children might contract this horrible disease. The federal government gives hundreds of millions of dollars to scientists at the best universities to decipher the inner workings of this virus, and they report that the reason it causes such global dysfunction is that it blocks a multitude of neurotransmitter receptors in the brain – dopaminergic, serotoninergic, muscarinic, adrenergic, and histaminergic. All of those neuronal pathways in the brain are compromised. Meanwhile, MRI studies find that over a period of several years the virus shrinks the cerebral cortex, and this shrinkage is tied to cognitive decline. A terrified public clamors for a cure. Now, such an illness has in fact hit millions of American children and adults. We have just described the effects of Eli Lilly’s best-selling antipsychotic, Zyprexa.

That excerpt is by Robert Whitaker from Anatomy of an Epidemic: Magic Bullets, Psychiatric Drugs, and the Astonishing Rise of Mental Illness in America

It’s a brilliant quote that I noted when I read it. Gets straight to the point. And all the second generation neuroleptics (antipsychotics) can cause such problems. All the other classes of psychiatric drugs, too, cause great disability in some people.

I’ve now been mostly homebound for more than 5 years. I was bedridden for two years. I was made gravely and chronically ill from psychiatric drug use. I wish I didn’t know this outcome so intimately.

We, who’ve been harmed, are routinely dismissed as hysterical and delusional. It’s a tragedy that continues everyday. Please share what you know about the harms these drugs can cause. Do it gently and lovingly, knowing that people faced with using them are often very vulnerable and all too often have no viable options.

We must, as a society, make options available widely.

The subtitle, American Psychosis, comes from a brilliant article by Chris Hedges, that is also worth reading. American Psychosis: What happens to a society that cannot distinguish between reality and illusion?

He’s written books on the topic too:

●  The World As It Is: Dispatches on the Myth of Human Progress

●  Empire of Illusion: The End of Literacy and the Triumph of Spectacle