Researchers say physical punishment actually alters the brain -- not only in an "I'm traumatized" kind of way but also in an "I literally have less gray matter in my brain" kind of way. "Exposing children to HCP (harsh corporal punishment) may have detrimental effects on trajectories of brain development," one 2009 study concluded. Harsh corporal punishment in the study was defined as at least one spanking a month for more than three years, frequently done with objects such as a belt or paddle. Researchers found children who were regularly spanked had less gray matter in certain areas of the prefrontal cortex that have been linked to depression, addiction and other mental health disorders, the study authors say. … [click on title for the rest of the post] 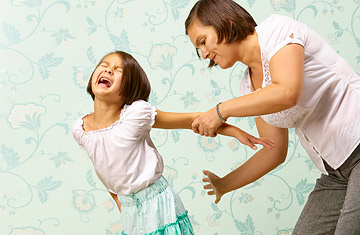 Two new studies show that providing parents with information that spanking can lead to short- and long-term child behavior problems may help to change parents’ opinion on this form of discipline. Parents who spank their children often believe it’s an effective form of punishment. Research has found that parents who spank believe spanking can make children behave or respect them. That belief drives parental behavior, more so than their level of anger, the seriousness of the child’s misbehavior or the parent’s perceived intent of the child’s misbehavior. However, decades of research studies have found that spanking is linked to short- and long-term child behavior problems. … [click on title for the rest of the post]