Why is it assumed that people need remain unaware of their physiological experience? This is exactly what meditation can attend to. It's called "mindfulness" for a reason. It's entirely possible to become aware of our bodies, minds and psyches. This sort of knee-jerk conclusion that determines we are helpless in the face of all our physiology strips people of their inheritance. We can be AWARE. We can wake-up. We can heal ourselves. 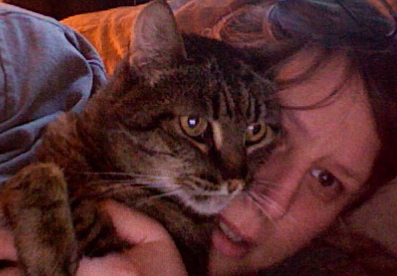 My darling Goddess Kali, kitty cat extraordinaire, died in the night at the venerable age of 21. Rest in peace my little muse. see also the below post where I speak to how she got her name: Goddess Kali, an archetype that has been with me a long time

Antidepressant withdrawal syndrome itself has nothing to do with the mythical imbalance of serotonin, norepinephrine, and dopamine that antidepressants are supposed to treat. It is autonomic damage: Disinhibition of the locus coeruleus and the glutamatergic system, which develops in the context of serotonin receptor downregulation, a recognized consequence of antidepressant use. For some people, it takes a long time for the serotonin receptors to correct. Without adequate serotonergic participation, other systems take over and establish a dysfunctional homeostasis.

I spent a lot of time with Tara Brach's work several years ago. Above is something new from her that is quite lovely. Below is the work that brought me to her. I still carry the teachings from Radical Acceptance with me. She is perhaps the first teacher who brought the idea of acceptance to my consciousness.

Congrats to all of us long, tireless advocates for a more sane approach to healing mental distress. There are those among us who have worked decades. I have worked years. It seems that the tide is turning. Perhaps it was Robert Whitaker's seminal book, Anatomy of an Epidemic: Magic Bullets, Psychiatric Drugs, and the Astonishing... END_OF_DOCUMENT_TOKEN_TO_BE_REPLACED

Dr. Kramer’s article was a response to Marcia Angell’s review of three books that have called into question the efficacy of psychiatric drugs, one of which was Robert Whitaker’s book Anatomy of an Epidemic, which won the 2010 Investigative Reporters and Editors Association Award for Best Investigative Journalism. Another was The Emperor’s New Drugs, by Irving Kirsch. The substance of Angell’s reviews was exposing the distortion of facts by academic psychiatrists and pharmaceutical companies who have portrayed antidepressants and other psychiatric drugs as effective and safe, when much countervailing evidence exists to show that they are in fact, over the long term, ineffective and harmful.

http://www.youtube.com/watch?v=FlwS66Plk2Q Please Don’t Pass Me By (A Disgrace) Music by Leonard Cohen via Beings Akin

Hornstein: The term “mental illness” is heavily charged, politicized, and ambiguous. I prefer to talk about “anomalous experiences,” “extreme emotions,” and “emotional distress.” The main reason I don’t use medical language is that people who are suffering often don’t find it very helpful. No one experiences “schizophrenia” — that’s just a technical name for a lot of complicated feelings.

I needed to be reminded of the ideas in this post today (and often, really) so I hope perhaps some of you, too, can benefit from them.

Robert Whitaker continues to be on the ball. His latest article on psychology today is about the phenomena of chronic depression being caused by anti-depressant use. Good documented evidence for those who still want to believe drugs are the answer.