I wish I’d been less compliant when I took psychiatric medication. The non-compliant folks have the best stories. They possess a richness of character. Their lives, on the surface, appear more fleshed out. They are, in some ways, more human.

I am, in my mind, something else, with an impoverished character. I took psych meds every day from age eleven to age thirty. The last five of those years were spent tapering off all meds. Now, I am healing, and learning how to be human. I no longer wake up with anti-psychotics, anti-depressants, benzos, stimulants, and sedatives queued up in a weekly pill organizer. Even the “jumbo” organizers weren’t large enough for all my medications. And I took those medications religiously. I didn’t know if they would help save my life, but I must’ve believed they’d deliver me from something…

Just not the routine of taking them.

When I was in the seventh grade, several of the other children gathered around my desk one day after class. They were not looking directly at me, not at first. They were only looking at each other. Awkwardly looking. As if each one held one of three keys, and all three keys had to be turned together to unlock something. To unlock the asking of a question…

One of the kids had an aunt who hadn’t been feeling very well. She went to the family doctor to get checked out, and as an eventual result – she’d been diagnosed with cancer. Her treatment routine involved frequent visits to the doctor.

“Do you have cancer?”

I wasn’t quite sure how to respond. I’d been leaving school early every week to go to the doctor. But my doctor was a psychiatrist. I wasn’t going for cancer treatment. I was going for psychotherapy, and to get my monthly prescription for an anti-depressant called Luvox that I was taking to treat OCD symptoms. I’d been going since the previous year.

I still feel at a loss for words, thinking back to that day. I was not a cancer patient, but I was managing a disease. I was a pre-teen on an anti-depressant. Thinking nothing of it. Maybe I was just glad I didn’t have to put it in applesauce first. Just half a glass of water and three quick swallows.

Except for the disease… That stuck around.

No – not the disease, but rather the idea of it being a disease. That stuck around.

I was an 11-year-old in 1995. Years later, after being sent to a therapeutic boarding school, my mom made a partial chart of my medication history: 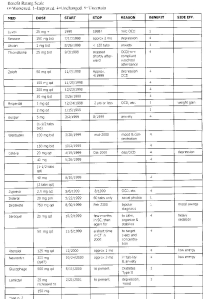 When I see things like this, I can’t help but wonder what life would’ve been like if I’d been less compliant. If I’d said disease be damned, and just skipped out on the pill taking.

That chart doesn’t even include page two. I was still sixteen on page two.

I was still compliant.

first published on Birth of a Patient

Russell Baugher was given one diagnosis and one medication at the age of eleven. By the age of twenty-five, he’d taken forty different psych meds for the half-dozen diagnoses he’d received and seesawed through several hundred pounds of weight gained while taking antipsychotic medication. He was managing the supposed disease of mental illness in relative isolation, believing that he would someday be the death of himself.

At twenty-five, he decided to take a chance on not being sick. He’s been free of psychotropic drugs for the last ten months – after five years of slow and careful reductions.

He didn’t learn to survive as a patient, but he did learn to endure. It’s something that aids him greatly in his time of continued healing, as he works to complete the transition from patient to human being.