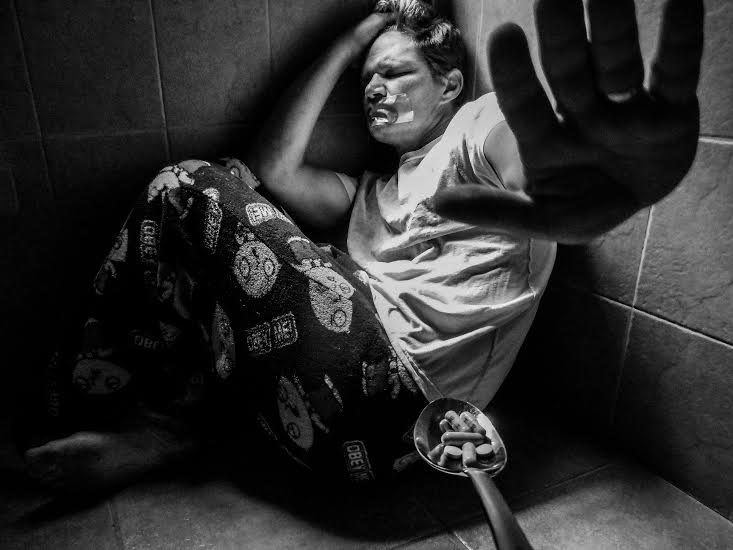 I got an email from Thomas Fallon. He submitted the below photograph (self-portrait). I thought it was powerful and that too many of us know what that image is conveying. It’s hard for me to look at, but I’ve been there. Have you? It makes me think too of this post here: For all who hold toxic secrets that are making them sick (because often we’re not allowed to tell them, as depicted in the below photograph)

You can see more of Thomas Fallon’s beautiful work at his photography website.

I figured I’d take this opportunity to share information about forced, or involuntary treatment. So below the photograph I’ve cut and pasted a collection on forced treatment. Forced treatment has been called torture by the United Nations. For good reason.

There is a sensitive and brilliant piece on Mad in America about forced and coerced psychiatric treatment, by Faith Rhyne. I’ve excerpted a bit below:

Why Is It So Hard to Think About Torture?

As a person who has experienced involuntary commitments, seclusion, restraints, forced medication, and intentional humiliation as part of my “mental health” treatment, I am still working through the severe and persistent effects of force and coercion. Being in relational dynamics in which I had no voice and in which I was not treated as a human being with viable thoughts and legitimate feelings impacted my sense of self in ways that were incredibly destructive.

I didn’t have a word for it when it was happening. Torture was something that happened to prisoners of war in faraway places and in terrible movies.

It was not something that happened to young Americans in modern hospitals. (read more)

UPDATE: You may want to go visit Mad in America today as the theme that day was torture and forced treatment.

Tina Minkowitz writes: To respond to controversy and resistance developing in response to the recommendation of Special Rapporteur on Torture Juan E. Méndez for an absolute ban on nonconsensual psychiatric interventions, I suggested to use June 26, the International Day in Solidarity with Victims of Torture, to raise awareness and support for the recommendations.  (see more)

If you’re not aware of just how brutal and coercive psychiatry can be, it’s well worth understanding. Some of it is so extreme it’s hard for those uninitiated to conceive of  but, sadly, it’s very common.  The bottom line is psychiatry, in general, at best, is subtly coercive. Drugs are generally presented as necessary rather than one, often far less than ideal, possibility for treatment. This means one is made to believe through somewhat more subtle coercion that they have no choice but to take drugs with very dangerous adverse effects that include disabling physical illness and very early death.

A book by Richard Bentall – Doctoring the Mind: Is Our Current Treatment of Mental Illness Really Any Good?

More on this topic:

●  That’s crazy: powerful documentary on the coercive nature of psychiatry

●  WNUSP statement on the Implications of the CRPD on Forced Treatment

●  The chill of forced incarceration and psychiatric “care” (otherwise known as gun control??)

●  (against involuntary “treatment”) The reflexive call for fewer liberties: by Glenn Greenwald who remains lucid in the chaos

*it is potentially dangerous to come off medications without careful planning. Please be sure to be well educated before undertaking any sort of discontinuation of medications. Do not assume your MD will know how to do it either. They are generally not trained in discontiuation. They don’t always understand that they don’t know how to help either. See: Psychiatric drug withdrawal and protracted withdrawal syndrome round-up