First published at Ron’s blog: Recovery from Schizophrenia and other psychotic disorders 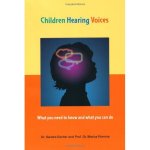 . It is a curious fact that this book is both completely down to earth, common sense and practical, and yet also completely revolutionary in its field.  That it can be these two things at once is both a reflection of the expertise of the authors and the abysmal state of much of the mental health field.

Rather than viewing voices (and visions) as the product of psychiatric illnesses, the authors, and the voice hearers and family members whose stories are told in the book, find ways of making sense of them in terms of what is going on in the child’s life.  Factors such as conflict, bullying, grieving, abuse, and not being able to relate to particular emotions are all found to be possible triggers for voices, and learning how to deal with these issues successfully is found to be related to voices fading away or at least becoming innocuous.

At one point in the book it is suggested that voices can be framed as “emotions that people had not come to terms with yet.”  Psychiatric approaches using drugs typically aim simply at suppressing or tranquilizing the person’s emotions, with the result that any development of ability to handle the emotions is delayed or never happens, and a lifelong dependence on drugs is created.  At another point, it is suggested that when children do develop the skills and strengths to cope with the voices, they may find that these same skills and strengths then help them cope with other difficult aspects of life.

Understood in this latter way, it is clear that voices are not something that is simply bad, but rather a coping strategy.  The person faces a problem they don’t know how to deal with, and then in an attempt to master the situation, the person finds or forms a voice that represents to them the problem they don’t know how to solve, which they then struggle with internally. Like any strategy, this approach may backfire and make things worse for awhile or even a long time as the person now feels oppressed by an inner tormentor, but when the person is helped to find inner and outer resources to deal with the voice, and becomes a stronger person as a result, the long term outcome may be good.

The authors of this did a multi-year study of children who heard voices, and by the end of the study 60% were no longer hearing voices, and many of those who still heard them were coping much better with them.  This outcome was due not to psychiatric treatment, but with increased ability to solve life problems and development as a person.

The findings of this book are consistent with my own experience in working with voice hearers, which includes few children but many young adults.  I think this book would be really helpful to professionals as well as to young voice hearers and their families and friends, and I highly recommend it.

Children hearing voices and what to do about that has been covered  before on Beyond Meds: An open letter to Oprah regarding Jani the seven yr old “schizophrenic”

Other posts by Ron Unger on Beyond Meds:

●  An outline of how mental health system is biased toward medication

●  A Guide for Therapists (and anyone interested in drug withdrawal)

●  Recovery: Why is it being redefined to mean “doing better but still mentally ill”?

●  Using acceptance to move through symptoms

●  How to reduce deaths associated with neuroleptics (anti-psychotic) medications

●  Talking to someone convinced mental distress is all biological

●  Moving Beyond Clinical Recovery and Personal Recovery: Reclaiming the Possibility of Full Recovery