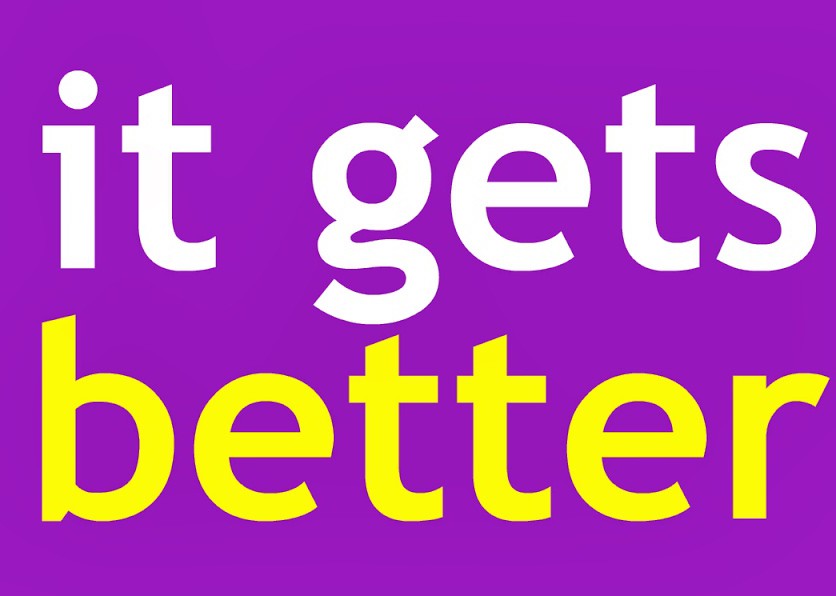 The IT GETS BETTER collection is intended to help those who are currently dealing with the iatrogenic (medically caused) injury from psych meds…so that they might know that we can heal. It is also intended to help educate the masses to the realities that we face. Protracted psychiatric drug withdrawal syndrome is real. It’s also sometimes gravely disabling. The fact is it’s largely denied in the medical community. We are routinely blamed and told that the experience is psychiatric…this leads to more drugging and sometimes forced drugging with the very drugs that have harmed us. This must end.

But yes, to those who are still suffering, it gets better. Indeed, I do not consider myself ill anymore. I consider myself HEALING which is a vibrant state of movement and change. My limitations do not mean that I am sick. Learning to make boundaries for my well-being has been one of the healthiest things I’ve learned to do. Deeply respecting the needs of this body/temple is one of the most wonderful achievements of WELLNESS.

Note: the pains described below are not 100% gone but they are no longer gravely acute nor disabling. At the time of writing they were still impairing me to a great degree even though I’d seen quite a lot of improvement even at that time. It’s pretty clear now that they are slowly on their way completely out. The trajectory continues toward wellness. Movement seems to help a lot. I practice yoga, ecstatic dance and I hike and swim. There were times when none of those things were possible and on occasion that still happens. But I started moving whenever it was possible a long time ago and I haven’t stopped doing that. Movement is a critically important part of my healing journey.

#12 from the IT GETS BETTER series

I don’t often talk about the numerous, odd and often acute aches and pains we who’ve been harmed by drugs often experience as a result of the iatrogenic damage from taking and then withdrawing from psychiatric drugs. I’ve referred to them often but not too often do I get explicit. There are a couple of exceptions to that and if you’re interested in reading more about some of the pains some of us face see these two posts:

Today, too, I am trying to get explicit, that it might help people recognize their situation. We are unfortunately often not believed by the medical establishment. Having language to describe these exceedingly strange and often debilitatingly acute pains can be very helpful.

One sort of pain (calling it just a symptom seems to totally strip it of it’s overwhelming nature!) I’ve referred to a few times is parasthesia. My doctor refers to them in the plural, parasthesias, as they are many and varied and words just really defy description. It’s nice to have found a doctor who recognizes this sort of damage caused by psychiatric medications. We are very often thought to be hysterical and delusional. These pains are believed to be psychiatric, not physical, by so many of the doctors we see when we are searching for help. It’s a horrible, horrible insult that adds to the injury. Also, many people who have these sorts of pains in other diseases are actually treated with psychiatric drugs to relieve the pain so we are also often offered the very same drugs that caused the pain to treat the pain. That is extraordinarily frustrating and potentially it can damn us to never recovering.

It seems most of us who have been harmed by psychiatric drugs in this way do recover in time, but for some of us, like me, it can take several years.

Anyway, to get to the point of this article, I found another word used that is similar to parasthesia and it struck me as more appropriate and I’m sure the two words are often quite interchangeable. They are both caused by central nervous system damage. I found an article speaking of dysesthesia. The fact that the acute pain is mentioned got my attention. Also they illustrated the article with a picture of a hand holding a bloody knife!! I’ve often described the pain I’ve experienced with that image exactly. “It feels like I’m being knifed repeatedly…”  I say.

This particular acute pain has actually diminished for me, thank god, but I had it for well over a year. I still get the same sort of dysesthesia but the acuteness has mellowed. It can still be overwhelming, however. This stuff can simply get insanely extreme and, again, most people simply have no way of conceiving how awful it is and that unfortunately too often includes the doctors we visit for help.

On a slightly different note, I do still get something that is probably more appropriately called a neuropathic pain, though, that still feels like I’m being impaled. I get the sensation that a long dagger goes in through my head and into my heart, creating a single pain that feels like it’s in two places, both the head and my heart. It’s nasty and acute. It’s been hypothesized it has something to do with the vagus nerve.

All of these pains seem to also often be associated with autonomic nervous dysfunction, which also has another fancy name: dysautonomia, which many of us harmed by psychiatric drugs also suffer from, myself included. That, unfortunately includes many other, very difficult symptoms. It’s worth clicking through and reading if you’re trying to learn about the large variety of possible ways people get sick as a result of drug iatrogenesis. The fact is there are even many more outside those mentioned in this post.

Now finally, the article that prompted this piece:

What is Dysesthesia and What Causes It?

Pain is always a difficult symptom to deal with, especially when it becomes chronic and difficult to treat. One type of pain that can take a variety of different forms is known as a dysesthesia. What is dysesthesia and what causes this strange symptom to occur?

Dysesthesias are unpleasant and sometimes painful sensations that come from inflammation or damage to nerves in the central or peripheral nervous system. The discomfort of a dysesthesia can take on a variety of forms. Some people describe their dyesthesias as a burning type of pain – often referred to as burning dyesthesias, while others describe the discomfort as a sense of wetness, a shock, itching, increased sensitivity, or even numbness. It’s no wonder this word comes from the Greek term for “bad sensation.” Some people with dysesthesias become so sensitive to touch that they have a difficult time tolerating the sensation of their clothing touching their skin….

…Dysesthesias are usually caused by abnormalities in either the central nervous system, which includes the brain and spinal cord, or peripheral nerves that lie outside the central nervous system. A host of diseases and conditions can cause dysesthesias. One of the most common is diabetes. Diabetics often have peripheral nerve damage that causes burning dysesthesias, typically involving the feet.

Another cause of dysesthesias is multiple sclerosis – a disease which involves demyelination (loss of the myelin sheath that protects nerves and helps them conduct more rapidly) of nerves in the central nervous system.

A host of other conditions can cause burning dysesthesias or other forms of altered sensation such as Lyme disease, diabetes, multiple sclerosis, shingles, HIV, certain medications, exposure to heavy metals, compression of a nerve root or peripheral nerve, and even vitamin deficiencies – particularly vitamins B6 and B12. (read the rest)

Warning: for those of us with psychiatric drug damage — be very careful experimenting with B6 and B12, some of us get dangerously sensitive to many substances and two of the most common are those vitamins, as well as other B vitamins. I now try to eat nutrient dense foods to get most of my vitamins. Whole, natural foods.

So, I offered the information in this post so that people might recognize some of their excrutiating “symptoms” and know that they are not mad, they are sick and their central nervous system has been DAMAGED by medications.

Take comfort though, by and large we heal, even if it takes a very long time. I’m sorry to say that until that time we do often live a nightmare that is unimaginable to most people and perhaps that is why we are disbelieved and thought to be hysterical. But it does pass. It does. And we learn so much if we allow it all to be our teacher. I try to make the best of my life today, even when there is sometimes nightmarish pain.

I write about some ways to manage and cope with the multitudes of pains here:

And I also talk about

●  Living well while being sick.

For an article with the history of my tale of wild untested psychopharma gone bad visit Dr. David Healy’s website: Monica’s story: the aftermath of polypsychopharmacology

The below are posts that show how far my healing has come, because it really does get better even if sometimes at a glacial pace.

*it is potentially dangerous to come off medications without careful planning. Please be sure to be well educated before undertaking any sort of discontinuation of medications. Do not assume your MD will know how to do it either. They are generally not trained in discontiuation. They don’t always understand that they don’t know how to help either. See: Psychiatric drug withdrawal and protracted withdrawal syndrome round-up