I was madly in love with Adam Ant when I was about 16 through 18. I followed him around California on one of his tours. I was young and silly but boy did he capture my attention at the time. I’ve always kept a bit of an eye on him since then. I knew he’d been given the DSM label bipolar and that he’s been hospitalized a couple of times. I found this article and interview from the BBC quite interesting. I’ve excerpted a couple of brief paragraphs I found most interesting. 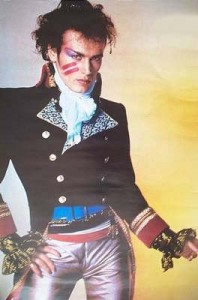 You’ve been away from the music business for so long. Why come back now?

‎”…I was on a lot of anti-depressants, which I now know I’m physiologically allergic to. I had to get my health straight, so I said ‘look guys, I don’t feel I can do it’.

So then I went away and, with the help of my GP, I very gradually came off that particular drug. It took me six months to get it out of my system and I’m pleased to say I feel kind of better.”

You’ve said in the past you have bipolar disorder. Did you ever feel the condition taking hold of your life?

I don’t accept the terminology.

If I give you examples of some people with bipolar disorder, you’ll find they’re all creative and they’re all magnificent in their own work.

As long as you pursue your work without hurting anybody, you should be left alone.

Mental health needs a great deal of attention. It’s the final taboo and it needs to be faced and dealt with.

But there’s only one thing worse than making a mistake, and that’s not learning from it… and I’ve learnt from it. read the rest here

May everyone reject diagnosis and heal.  RETHINKING BIPOLAR